Autumn in Florence, Part I 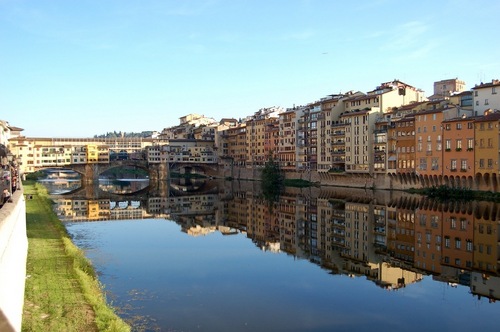 I first knew Florence early enough, I am happy to say, to have heard the change for the worse, the taint of the modern order, bitterly lamented by old haunters, admirers, lovers--those qualified to present a picture of the conditions prevailing under the good old Grand-Dukes, the two last of their line in especial, that, for its blest reflection of sweetness and mildness and cheapness and ease, of every immediate boon in life to be enjoyed quite for nothing, could but draw tears from belated listeners. Some of these survivors from the golden age--just the beauty of which indeed was in the gold, of sorts, that it poured into your lap, and not in the least in its own importunity on that head--have needfully lingered on, have seen the ancient walls pulled down and the compact and belted mass of which the Piazza della Signoria was the immemorial centre expand, under the treatment of enterprising syndics, into an ungirdled organism of the type, as they viciously say, of Chicago; one of those places of which, as their grace of a circumference is nowhere, the dignity of a centre can no longer be predicated. Florence loses itself to-day in dusty boulevards and smart beaux quartiers, such as Napoleon III and Baron Haussmann were to set the fashion of to a too mediÃ¦val Europe--with the effect of some precious page of antique text swallowed up in a marginal commentary that smacks of the style of the newspaper. So much for what has happened on this side of that line of demarcation which, by an odd law, makes us, with our preference for what we are pleased to call the picturesque, object to such occurrences even as occurrences. The real truth is that objections are too vain, and that he would be too rude a critic here, just now, who shouldn't be in the humour to take the thick with the thin and to try at least to read something of the old soul into the new forms.