Also known as the Museum of the traditional Florentine house, The Palazzo Davanzati was erected in the 14th century by the Davizzi family, who were wealthy members of a wool guild. In 1516 it was sold to the Bartolini family, and, later that century, to the Davanzati family, who held it until 1838. After the suicide of Carlo Davanzati, it was split into different quarters and modified. After escaping the numerous demolitions of 19th century Florence, it was bought by Elia Volpi, an antiquarian, who restored to its original state. 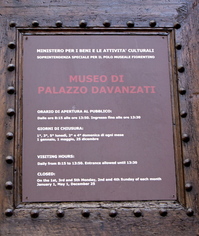 In 1910, Volpi opened the building as a private museum. The contents of the museum kept changing as Volpi sold the furniture at auctions, including a major sale in 1916 in New York. In the 1920s, Egyptian antique dealers Vitale and Leopoldo Bengujat acquired the building and its contents. It was acquired by the Italian State in 1951.

The Palazzo is entirely furnished with paintings, furniture and objects partly derived from other Florentine museums and partly from donations and acquisitions. Apart from the furnishings, which faithfully reflect those of a Florentine home from the medieval to the renaissance periods, the museum also has an important collection of lace from Italy and elsewhere.