This section features videos of Florence, a mix of our original productions, and various things found on the web.

Below are some of our most recent entries posted in the Video category - use the links at the end of the page to access all the articles individually.

The Cradle of the Renaissance, Part 2

Here is the second part of the amateur video, The Cradle of the Renaissance:


The Cradle of the Renaissance, Part 1

Here is an entertaining tourist video of a visit to Florence, Part 1. While the scholarship may be a bit brief I applaud the effort - nice job:

You will also see him eat a tripe sandwich - the cart is in Piazza Cimatori right in the center of town, and actually my favorite place for bollito (boiled beef sandwich).

Calcio Fiorentino or Calcio in Costume - better known in Florence as Calcio Storico - is a traditional football game dating back to the 15th century. A violent mix of football, soccer, wrestling and perhaps boxing, the tournament is played in medieval costume every year from mid to late June. The final match is always held on June 24th, as a celebration of the city's patron saint, St. John the Baptist (San Giovanni). The event takes place in Florence's Piazza Santa Croce, where the piazza is transformed into a playing field with a thick layer of sand under the players and bleacher-style stands for the spectators: 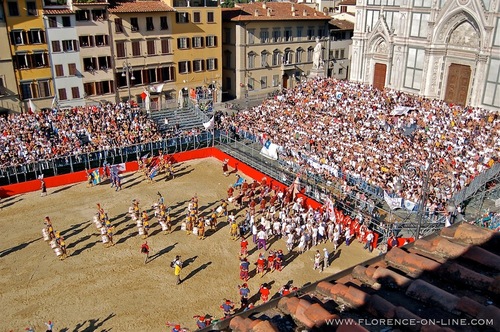 The exact origins of the game are unclear, but some believe it began as a way to keep military troops in shape while waiting to go to battle. Later, it became more of a competitive sport for young Florentine aristocrats. The first official rules for the Calcio Storico were written by Florentine Count Giovanni de'Bardi di Vernio in 1580. Each game of the Calcio Storico has 54 players divided into two teams of 27 which are lined up in three rows. After that, it seems there are no real guidelines - just the final objective of making a goal. The round ball is tossed around the field while the players do anything in their power to stop their opponents from scoring. Punching, tackling, kicking and clawing are all acceptable tactics to stop the opponent (we also saw biting and sand throwing one year!). A goal is made by throwing the ball over 4 foot high wooden wall that runs the length of the field.

The four teams consist of players from four areas of the city: Santa Croce ("Azzurri" or Blues); Santa Maria Novella ("Rossi" or Reds); Santo Spirito ("Bianchi" or Whites); and San Giovanni ("Verdi" or Greens). Needless to say, passionate loyalties fuel the ruthlessness of the tournament.

Before each game, a long procession of the players, flag throwers, drummers, and other Florentine citizens all dressed in historical costumes starts from Piazza Santa Maria Novella and slowly makes its way to Piazza della Signoria, down Via de'Neri, and then up Via dei Benci until it finally reaches Piazza Santa Croce. The comradery, pageantry, costumes and trumpets are quite impressive and worth watching even if you don't have the stomach (or tickets - which are usually very hard to come by) to watch the actual game.

For a real sense of the atmosphere of the event, we found several well-done videos of the Calcio Storico:

The official website of this event is at: http://www.calciostoricofiorentino.it 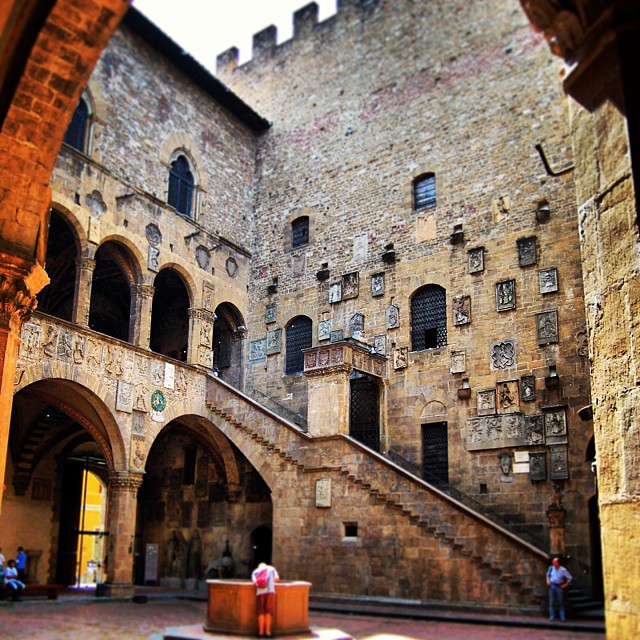 The Bargello has an extensive collection of sculpture and masterpieces of art. It occupies an impressive building that was formerly a prison barracks and home to the military captain in charge of keeping peace and justice during riots and uprisings.

Since 1865, the palazzo houses the National Museum, bringing together many important
Renaissance sculptures, including masterpieces by Donatello, Luca della Robbia, Verrocchio, Michelangelo and Cellini. The museum was subsequently enriched with splendid collections of bronzes, majolica, waxes, enamels, medals, seals, ivories, amber, tapestries, furniture and textiles from the Medici collections and those of private donors.

Here is a video (in Italian) featuring the art works of the Bargello:

Here is a few seconds of video from around Piazza Duomo from FlipFlorence:

Hey - someone else likes PerchÃ¨ no!

The renovation to the pavement and lawn of Piazza Santa Maria Novella seems to be completed (as of August 2009). Curiously the new pavement does not fully encircle the area - there is black top around the one corner. This may be necessary (or temporary) as this spot is where the new underground waste disposal system is.

There are new benches in the center of the piazza, and the very green lawn now has a sprinkler system. It does appear that you can use the lawn also - I didn't see any "Keep Off The Grass" signs and also no physical barriers to the area.

The video was shot early one morning in the first half of August with the cleaning crew hard at work.


All entries in Video (alphabetical listing)