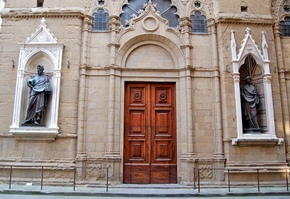 One of the most beautiful architectural examples in Florence and a great source of Florentine civic pride, the church and museum of Orsanmichele is a rewarding stop in any itinerary of Florence.

Orsanmichele is known for the sculptures of saints placed in the niches or tabernacles on all four sides of the church by the various guilds of Florence. Executed between 1340 and 1602, they form a timeline of gothic and renaissance art that is perhaps unrivaled in one location. The first sculpture, of St. Stephen by Andrea Pisano, was executed in 1340 - 150 years before Columbus discovered America - the last, St. Luke by Giambologna - was completed over 260 years later.

Orsanmichele's unique history as a site that has dramatically changed function over the centuries is very interesting. It is speculated that in Roman times there was a building here dedicated to the worship of Isis. Later, in the 9th century it was used by the Lombards as an oratory dedicated to St. Michael. By order of the Comune in the early 13th century it became a market where wheat was sold, eventually under a brick and wooden awning constructed by Arnolfo di Cambio. During this period the first "Madonna of the Graces" painting was done on a pillar of that structure, which was soon followed by miraculous events. Eventually destroyed by a fire in 1304, it was followed in 1337 by a more robust structure that was erected by either some or all of the following from a design, according to Vasrai, of Taddeo Gaddi: Francesco Talenti, Simone Talenti, Neri di Fioravante, Benci di Cione and (the most recent favorite of current scholarship) Andrea Pisano. This time made of brick and stone to better withstand fires, the new building had an open loggia on the ground floor similar to the one at the nearby Mercato Nuovo (known to many tourists as the "Straw Market") for the selling of wheat, while the upper was designed to serve as the granary. Two of the piers are hollow and were used to move the grain between floors; the slots through which the grain passed are still visible. In 1347 Bernardo Daddi's "Madonna and Child with Angels" was commissioned to replace the original "Madonna of the Graces".

While Orsanmichele continued to function as a commercial site for some time, pilgrims inspired by the story of the miraculous appearance of the Madonna there began visiting the site in increasing numbers, especially in the uncertain times after the Black Plague struck in 1348. As the legend of the new "Madonna of the Graces" grew, a tabernacle was commissioned to protect it. This masterpiece by Andrea Orcagna was completed in 1359. Both the painting and the tabernacle provide excellent examples of the aesthetics of the late medieval period.

Eventually it was decided to relocate the grain market and to rededicate the building as an oratory. To this end, the open loggia was closed up around 1380. The stained glass windows added around this time are some of the oldest in Florence, and illustrate the miracles of the Madonna of Orsanmichele. In 1410 Ghiberti constructed the two doors that are still used today.