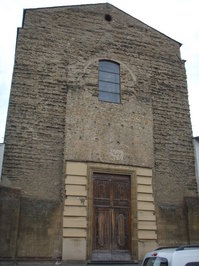 Santa Maria del Carmine is a church of the Carmelite Order. It is famous for its Brancacci Chapel which houses magnificent Renaissance frescoes by Masaccio and Masolino da Panicale, later finished by Filippino Lippi.

The church, dedicated to the Beatà¦ Virginis Marià¦ de monte Carmelo, began to be built in 1268 as part of the Carmelite convent, which still exists today. Of the original edifice Some Romanesque-Gothic remains of the original structure can still be seen on the sides of the church. The complex was enlarged once in 1328 and again in 1464, when the capitular hall and the refectory were added.

Renovated again in 16th-17th centuries, the church was damaged by a fire in 1771 and rebuilt internally in 1782. The façade, like many other Florentine churches, remained unfinished. The fire did not touch the sacristy and fortunately many artworks survived, including the stories of St. Cecilia attributed to Lippo d'Andrea and the marble monument of Pier Soderini by Benedetto da Rovezzano. The vault of the nave has a trompe-l'oeil fresco by Domenico Stagi.

The Bracacci Chapel also survived the fire and was also restored due to the intervention of a Florentine noblewoman who firmly opposed the covering of the frescoes. The Chapel is home to famous frescoes by Masaccio and Masolino, considered the first masterworks of the Italian Renaissance. Masaccio's master, Masolino, commissioned by a wealthy merchant, Felice Brancacci, began work on the chapel in 1425 but the project was soon taken over by his pupil whose treatment of figures in space made the frescoes among the most important to have come out of the Early Renaissance. The scenes by Masaccio are the Expulsion from Paradise, The Tribute Money St Peter Healing a Lame-Man, and St Peter Raising Tabitha from the dead. The cycle was finished by Filippino Lippi

The Corsini Chapel of the church was built by the Corsini, probably the richest family in Florence during the 17th-18th centuries. The chapel is dedicated to St. Andrew Corsini, a Carmelite bishop of Fiesole who was canonized in 1629. The architect Pier Francesco Silvani choose a Baroque style for the chapel. The small dome was painted by Luca Giordano in 1682. The elaborated rococo ceiling is the work of one of the most important 18th century artists in the city, Giovanni Domenico Ferretti.

The convent of the church has suffered several times from numerous disasters, from the fire to the flooding of 1966. Most of the artworks are therefore damaged: these include the Bestowal of the Carmelite Rule by Filippo Lippi and the Last Supper by Alessandro Allori, and remains of works from other chapels by Pietro Nelli and Gherardo Starnina.