Trip reports, restaurants, photos, and other notes on Italian cities and towns that are outside of a day trip from Florence.

Below are some of our most recent entries posted in the Further Afield category - use the links at the end of the page to access all the articles individually. 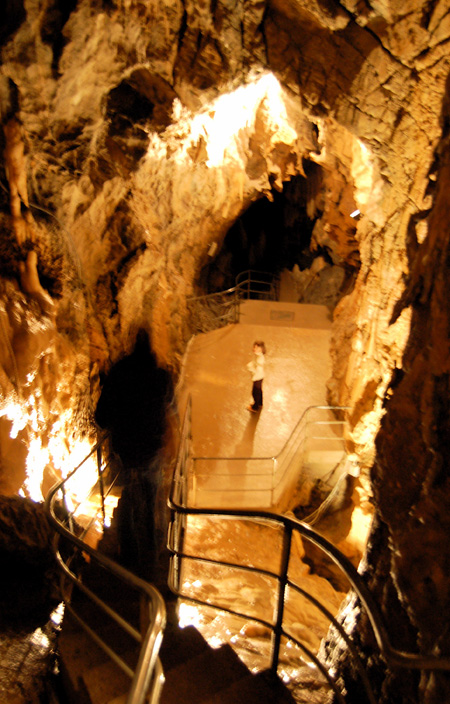 North of Lucca, in the area known as the Garfagnana, is the Grotta del Vento - one of the most accessible (and highly commercialized!) caves in Tuscany. As a day trip from Florence with kids, it is pushing the limit - we followed the directions on the official website, which had us getting off the main highway much earlier than Lucca, and it was slow and tedious going trying to stay on the correct roads. I would suggest you stay on the A11 until Lucca and then get on the SS12 heading north up the Serchio River Valley.

The trip is nearly two hours, but once you are past Lucca and start heading up the valley, it is really quite picturesque. You also pass the Devil's Bridge at Borgo a Mozzano which is an amazing example of medieval engineering. Either before or after a visit to the cave, you can also stop in Barga (barganews.com is a good website), a beautiful and ancient hill town with the ruins of a Roman aqueduct among it's sights.

The picture is of our daughter Alice in the cave.

We spent a relaxing winter weekend in Sillico recently - a small hamlet of about 100 people in the region known as the Garfangana (just about a 2 hour drive from Florence). The Garfangana is up the Serchio river valley north of Lucca, and lies between the Alpi Apuane (famous for Carrara marble) and the Apennines. We stayed in a lovely little apartment that is part of a triplex just below (100 meters down the road) the town - there are two rental units, and the owners live in the third. You can find more about the house here (we highly recommend it!). There is also an excellent restaurant in Sillico, Belvedere, with regional cuisine, home made pastas, and a friendly and warm staff. We really enjoyed the dinner we had there, especially the copious antipasti (don't miss it if you get the chance) and local wine (€6 a bottle!).

The Garfangana in general is known for its chestnuts - and surrounding Sillico there are numerous marked walking trails through the forests and hills. Most of the pictures below are from the house and the walk we took in the immediate area. Sorry but I have yet to identify the names of the mountain peaks! 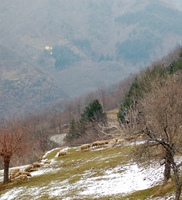 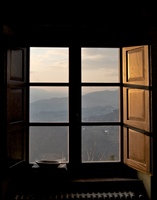 An Amazing Day In Rome

I went down to Rome a couple of weeks ago to see some friends from America who were on holiday. The weather has been great so far (for November) and it was a perfect day for photos. Here are a few from around the Roman Forum:

Nanà is a very good little restaurant not far from the Quirinale in Rome. The feature is seafood - which is fresh and delicately handled. I recently had a lunch there on a one day business trip from Florence to Rome and the food was excellent.

I had paccheri with fresh fish and cherry tomatoes, and my friend had zuppa di pesce. Both were outstanding - piping hot, fresh, just cooked, and full of flavor. We had two glasses of wine, desserts (very good), and coffee, as well as a bottle of water, for around €65 including cover and service. Not an economy meal, but a very good one!

Below is the restaurant on Google maps:

Vinci is a small village about an hour from Florence by car (see map below), and most famous as the birthplace of Leonardo da Vinci. The town is surrounded by hills with the typical Tsucan landscape of vineyards and olive groves that are much the same as in Leonardo's time.

There is a little piazza with an installation by Italian artist Mimmo Paladino which we thought was interesting the day we visited.

You can reach many interesting cities from Florence in a day - even outside Tuscany. I finally made it to Milan (about 3 hours on the Eurostar train - 42 euro each way, 2nd class the new trains starting in mid-December 2009 will cut this trip to about an hour and a half!) for the first time a few weeks ago, and even though it was a rainy day I had a great time strolling around the center of the city.

Coming into Milan from Florence on the train you enter the city at the Stazione Centrale - an absolutely huge Fascist influenced piece of architecture that is currently (winter 2008/2009) being modernized. The cavernous interior spaces of this station are truly remarkable. The station is a little bit of a hike from the center so I took the underground (Linea 3) to Piazza Duomo. This can be a little tricky so make sure you read the signs closely - the line is called "Duomo" but from the train station you need to make sure you are heading in the direction of the Duomo (the terminus in that direction is San Donato) and not out into the suburbs.