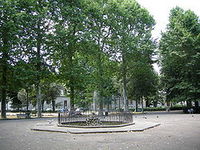 Constructed in 1865, this piazza takes the form of a square garden that takes its spatial inspiration from English squares. Up until the First World War the garden was closed by a gate and only owners of the residences surrounding the square had keys to enter. The politician and writer Massimo d'Azeglio died a year before the city council decided to name the square after him in 1866.

The garden in the square is home to a number of pathways and flower beds. Especially impressive are the many hackberry and sycamores trees, as well as the small pool at the center of of the piazza. Since the 1990s there has been a progressive removal of diseased trees that have been deemed unsafe because of their age. Additionally, the square contains a playground, a carousel and a small soccer field. At the center of the park, just before Florence became the (former) capital of Italy, a theatre was built and named after Umberto I. The construction was destroyed by a fire in 1889 and never rebuilt.

The buildings surrounding the square date from the 18th and 19th century. The Villino Uzielli, constructed by the architect Paolo Emilio Andrà©e, was the home of the Polish writer Stefan Å»eromski, the author of the patriotic poem Ash Wednesday.

On one side of the garden lies a small monument in memory of three partisans who died on June 7, 1944: Enrico Bocci, Italo Piccagli and Luigi Morandi. They were all decorated with a gold medal for valor and were killed by fascists who discovered the group in one of the buildings of the square.