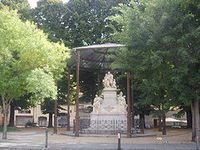 Piazza Demidoff is dedicated to the family of the Russian ambassador Nicholas Demidoff, who lived in a palace overlooking the square.

In the square lies a monument to Demidoff commissioned in 1828 by his sons Anatoly and Peter. They ordered the sculptor Lorenzo Bartolini to create a marble statue representing their father surrounded by four allegorical groups representing virtues. Work on the monument was carried out between 1830 and 1849 and only finally completed in 1871 by a student of Bartolini, following the death of the artist. Originally the monument was to be placed in the Villa di San Donato, but later it was given to the City of Florence.

The opening of the Arno river connects Piazza Demidoff to a scenic route on the Viale dei Colli Serristori.