In 1252, Augustinian monks built a monastery and a church dedicated to "Saint Mary of Ognissanti and the Holy Spirit", which became soon known as the Church of the "Holy Spirit", or as it is known today, Santo Spirito. In just a few decades the church became one of the most important in Florence, and at the end of the 13th century the City council bought the buildings in front of it and demolished them in order to create a wide square. In the subsequent century, the church was rebuilt under Brunelleschi's direction. The edifice represents Brunelleschi's last work and he died before it was completed. 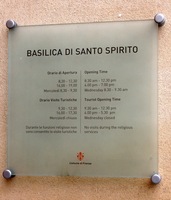 Today the piazza is lined with several bars, restaurants, shops and small hotels. There is a general market on some days of the week, with produce and other regional specialties as well as antiques and collectibles. An organic food (and more) market on the third Sunday of each month (see our photo feature "Santo Spirito Organic Market") is always a great thing to do for tourists and residents alike. Besides great fruit and vegetables, you can also usually find various organic breads, rice, pasta, olive oil, wine, etc. as well as food to eat on the spot or take away.

In the evening the piazza is filled with people sitting on the church steps or around the fountain in the piazza, and diners eating al fresco at some of the many various restaurants (note: late at night this area is known to be a little sketchy, with heavy drinking and drug use/sales). Other concerts, events, and fairs also take place in the piazza during the year.