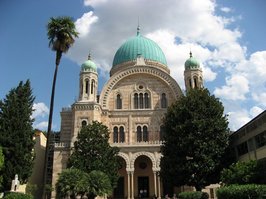 The Great Synagogue (Tempio Maggiore) was built between 1874 and 1882. The architects were Mariano Falcini, Professor Vincente Micheli, and Marco Treves who built the structure in the Spanish-Moresco style.

Layers of travertine and granite alternate create a striped effect on the facade. Old photographs show bold red and beige stripes, but the bold colors of the stone have faded over time, leaving a more mottled effect.

The overall form of the synagogue is the cruciform plan of Hagia Sophia. The corner towers are topped with horseshoe-arched towers themselves topped with onion domes in the Moorish Revival style. Three horseshoe arches form the main entrance and above them rise tiers of ajimez windows with their paired horseshoe arches sharing a single column.

Inside the building the walls are almost completely covered with colored designs in Moorish patterns. The interior mosaics and frescoes inside are by Giovanni Panti. Giacomo del Medico designed the great arch.

During World War II Fascist troops used the synagogue as a vehicle garage. In August 1944 retreating German troops worked with Italian Fascists to destroy the synagogue, but the Italian resistance managed to defuse most of the explosives. Only a limited amount of damage was done. The synagogue was restored after the war. It was restored again after damage by massive flooding in 1966.

The synagogue has been widely admired, and the 1892 Eutaw Place Temple of Temple Oheb Shalom in Baltimore, Maryland, represents a replica.