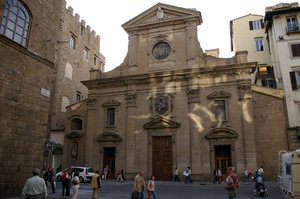 Santa Trìnita (the accent on the first vowel connotes the latin origin of the name) is a Florentine church of the Vallumbrosan Order of monks founded in 1092 by a Florentine nobleman. The church is noted for the Sassetti Chapel (along with many other works), containing notable frescoes by Domenico Ghirlandaio that represent true masterpieces of 15th century art.

The current church was constructed over 11th century churches during 1258-1280. Multiple reconstructions occurred thereafter. The Mannerist façade (1593-1594) was designed by Bernardo Buontalenti. The relief over the central door of the Trinity was sculpted by Pietro Bernini and Giovanni Battista Caccini. The 17th century wooden doors were carved as a remembrance of Vallombrosan saints.

The church has approximately 20 chapels, each of which contain a significant amount of artwork. The most famous are the Sassetti and the Bartolini-Salimbeni chapels which contain frescoes by Domenico Ghirlandaio and the Quattrocento artist Lorenzo Monaco, respectively. Francesco Sassetti had been a manager of the Medici bank. The Ghirlandaio frescoes used as backgrounds contain then contemporary Florentine city views.

The Column of Justice in the Piazza Santa Trìnita, outside of where the church stands, originates from the Baths of Caracalla of ancient Rome, and was a gift to Cosimo Medici from Pope Pius IV.