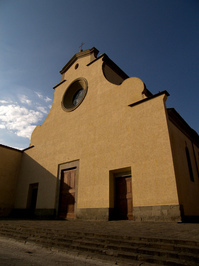 The Basilica of Santa Maria del Santo Spirito ("St. Mary of the Holy Spirit") is located in the Oltrarno quarter of Florence, facing the piazza with the same name. The basilica is a pre-eminent examples of Renaissance architecture.

The current church was constructed over the pre-existing ruins of a 13th century Augustinian convent which was destroyed by a fire in 1471. Filippo Brunelleschi began designs for the new building as early as 1428. After his death in 1446, the works were carried on by his followers, including Antonio Manetti, Giovanni da Gaiole, and Salvi d'Andrea; the latter was also responsible for the construction of the cupola.

Unlike San Lorenzo, where Brunelleschi's ideas were thwarted, here, his ideas were carried through with much fidelity, at least in the ground plan and up to the level of the arcades. The Latin cross plan is designed as to maximize the legibility of the grid. The contrast between nave and transept that caused such difficulty at S. Lorenzo was here also avoided. The side chapels, in the form of niches all the same size (forty in all), run along the entire perimeter of the space.

Brunelleschi's facade was never built and left blank. In 1489, a columned vestibule and octagonal sacristy, designed by Simone del Pollaiolo, known as Il Cronaca, and Giuliano da Sangallo respectively, were built to the left of the building. A door was opened up in a chapel to make the connection to the church.

A Baroque baldachin with polychrome marbles was added by Giovanni Battista Caccini and Gherardo Silvani over the high altar in 1601. The church remained undecorated until the 18th century, when the walls were plastered. The inner façade is by Salvi d'Andrea, and has still the original glass window with the Pentecost designed by Pietro Perugino. The bell tower was designed by Baccio d'Agnolo.

The church has 38 side chapels which contain a some beautiful masterpieces. The most significant is the Bini-Capponi Chapel, housing the St. Monica Establishing the Rule of the Augustinian Nuns painting by Francesco Botticini. The Corbinelli chapels contain works by Andrea Sansovino, Cosimo Rosselli and Donnino and Agnolo del Mazziere. In the chapels of the transept are frescoes by Filippino Lippi.

The sacristy was designed by Giuliano da Sangallo in 1489, and has an octagonal plan. It is home to a devotional painting of St. Fiacre curing the sick by Alessandro Allori commissioned by Christine of Lorraine, Grand Duke Ferdinando I de' Medici's wife.