The Piazza della Signoria is the historic, artistic, political, and emotional heart of Florence. The most prominent feature of the Piazza (among many) is the Palazzo Vecchio, Florence's town hall, where the mayor still keeps his office. The current "L" shape of the Piazza is due to the razing of some medieval buildings during the Renaissance.

To the right of the Palazzo is the impressive arcaded Loggia del Lanzi - built between 1376 and 1382 by Benci di Cione and Simone Talenti, it was originally called the Loggia dei Priori since it provided shelter for outdoor ceremonies marking the change of the priori, or city rulers, which took place here every two months. To this day the loggia provides free, covered seating for tired tourists amongst its treasures of Renaissance and ancient art. In addition to some heavily restored Roman statues of lesser historical import, the loggia is home to Benvenuto Cellini's 1545 bronze "Perseus" (the original is still in situ), a tour de force of bronze casting, and Giambologna's spiraling Mannerist "Rape of the Sabine Women" of 1583. The "Rape of Polyxena" by Pio Fedi and Giambologna's "Hercules and the Centaur" can also be found in the loggia.

Several other notable works of sculpture adorn the Piazza della Signoria. To the left of the door of the Palazzo is a marble copy of Michelangelo's "David", marking the location where the original stood from 1504 until it was removed to the Accademia in 1873. To the right of the door is Baccio Bandinelli's "Hercules and Cacus" from 1534. A copy of Donatello's diminutive (compared to the other sculptures) but powerful "Judith Slaying Holofernes" (originally in the Palazzo Medici but taken to this location when the Medici where run out of Florence) in bronze is also located in front of the Palazzo. To the left of the Palazzo is the Neptune Fountain whose main figure in marble bears the features of Cosimo I, sculpted by Ammannati. The fountain is also surrounded by bronze sculptures. Toward the center of the piazza is a more flattering bronze equestrian statue of Cosimo I, again by Giambologna. The Trade Tribunal (Tribunale di Mercanzia) of 1359, from which trade was regulated and merchant disputes settled, is located at the short end of the piazza. Emblems of the guilds appear in a frieze above the second story of its facade.

All of this sits atop the ancient Roman ruins of the original town, including a theater, public latrines, and church ruins (there is a map on display in front of the Chanel boutique near the North West corner of the Piazza).

If you'd like to just sit back and soak in the history, take a table at Rivoire of Perseus, two of Florence's most famous cafÃ©s. The prices will be high for table service, but the location, coupled with the hot chocolate and whipped cream are well worth the expense. A century-old erborista selling lovely perfumes and soaps is located nearby at Via Vacchereccia, 9/r. 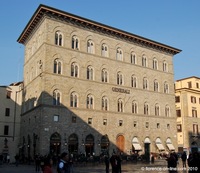 An important note about much of the sculpture in the Palazzo Vecchio, whether it is from the Medieval or Renaissance period, is the absolute violence of the imagery. There are literally several beheadings, rapes, murders and other violent acts carried out in these sculptures - a direct reflection on what was conveyed to the population of the times. These sculptures are a message of fear, of social control, and policing of the populace through art. They display both the power of the ruling classes of the period(s) and at the same time send a warning to the citizens to stay in line, or the same kinds of things could happen to them - much like what happened to Savonarola - the spot where he was burned at the stake along with two other monks is marked in the pavement in front of the Neptune fountain.

Update: here is a really outstanding piece of video that drives home the point made above about the violent imagery in the Piazza: