Located near the San Lorenzo Market, the Palazzo Medici is one of the finest and most famous palazzos of Florence. It was built in the fifteenth century on the commission of the Medici family by Michelozzo di Bartolomeo Michelozzi, a disciple of Ghiberti and collaborator of Donatello. The palazzo is a prototype of Renaissance civil architecture and effectively represents the power and influence of the Medici family. The building exerts influence on new architectural projects to this day, and has many features, like the rusticated stones on the lower level and the finer cuts stone at the top that have been copied for centuries.

The Palazzo Medici contains a museum with regular exhibitions dedicated to major figures in modern and contemporary art (like this exhibit by Yang Maoyuan). The palazzo has a beautiful seventeenth-century staircase that leads to the Chapel of the Magi, containing imaginative frescoes by Benozzo Gozzoli that are considered to be some of his finest work. There is also a fine statue of Orpheus by Baccio Bandinelli in the ornate courtyard. 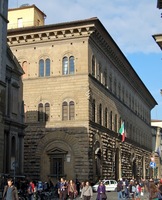 The Scala Archives have many more photos (watermarked and copyrighted) of the Palazzo Medici and the works of art contained in it.