Piazza della Repubblica is one of the largest and most famous city squares in Florence. It is the original site of the Roman Forum (from which columns are believed to be used in the interior of San Miniato). The remains of the ancient Campidoglio are buried beneath what once was the Teatro Gamberinus (now the location of the Hard Rock Cafà©!), just off the northwest corner of the piazza on Via Dà¨ Brunelleschi. 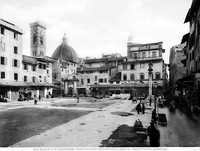 Centuries later the piazza served as the Mercato Vecchio, or "Old Market", until around 1888 when most of the existing buildings were demolished: the Jewish ghetto was razed, market booths were demolished, and the Loggia del Pesce that stood there was taken apart and reassembled in Piazza Ciompi. This was all during this period of the city's "improvements" - public works that were initiated while Florence served (before Rome) as the first capital of a reunited Italy.

One relatively ancient touch left is the column in the east center of the piazza (the column is ancient and thought to be Roman in origin, the statue is not). Known as the "Colonna della Dovizia", it is topped by a sculpture known as "a colossal personification of Abundance"1, "its imagery depended on the symbol for the Roman state charity, the "Alimenta"2. This is believed to be a copy (of a copy) by Giovan Battista Foggini of Donatello's version of "Dovizia" - "Abbondanza" or "Abundance" - (the original now lost and/or ruined by exposure). Considered to be the centre of the city, this column was erected at the crossing of the cardo and decumanus of the ancient Roman city at the time called Florentia.

Other than the column, however, almost no trace of Roman Florence, the Jewish Ghetto, or even medieval or Renaissance Florence remain in this location. The "new" piazza is controversial to many historians and scholars to this day, and some see it as the low point of Florence's architectural history. One often heard complaint is of the inscription above the arch known as the "Arcone". It reads:

Or roughly: "The ancient center of the city, from age-old squalor, restored to new life".

Unfortunately this gratuitous and pompous display is probably one of the most notorious spots for tourists to pose in front of for photos - even though it is perhaps the least historically significant piece of architecture in all of Florence.

Today Piazza della Repubblica has several contemporary features worthy of interest however. The first is a lovely merry-go-round (Giostra) that is a godsend to parents dragging sight seeing weary children around the city. Nearby, a small three-dimensional map of the city cast in bronze provides a nice orientation to the center of Florecne. Under the arcaded façade of the main post office on the south western boundary of the piazza, a fantastic flower and plant market takes place every Thursday morning (highly recommended if you want to feel like a Florentine).

Of the cafà©s lining the piazza, the most notable are Caffà© Gilli (founded in 1733), Caffà© Paskowski (1846) and Caffà© delle Giubbe Rosse, which were meeting points for many of the city's artists and writers in the past. (Dining tip: you can still get an amazing self serve lunch at Paskowski from 6 to 7 euro plate).

The square today can still be full of street artists, especially in the warmer months - singers, classical guitar players, water colorists, and the occasional weekend markets and festivals (like the Florence Gelato Festival).

As to accommodation and shopping, facing onto the piazza from Via Roma is the Hotel Savoy, one of the toniest hotels in the city. There are other smaller hotels smattered about also, either on the piazza itself (on the upper floors of some of the mentioned restaurants or office buildings) or on side streets. The large retailer Rinascente is on the south east side of the piazza, and there is a wonderful view from their roof top cafà© (worth a photo op on a nice day!).

1 & 2 Donatello's "Dovizia" as an Image of Florentine Political Propaganda