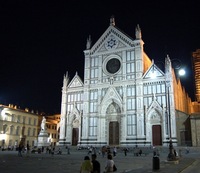 Piazza Santa Croce is one of the largest and most famous squares of central Florence. The Basilica of Santa Croce, the largest Franciscan church in the world, overlooks the piazza. The basilica's most notable features are its sixteen chapels, many of them decorated with frescoes by Giotto and his pupils, and its tombs and cenotaphs. It is the burial place of some illustrious Italians, such as Michelangelo Buonarroti, Niccolò Machiavelli, Enrico Fermi, Galileo Galilei, Ugo Foscolo, Guglielmo Marconi, Luigi Cherubini, Leon Battista Alberti, Vittorio Alfieri, Gioacchino Rossini, Lorenzo Ghiberti, Lorenzo Bartolini, Pier Antonio Micheli, Bartolomeo Cristofori, and Giovanni Gentile. For this reason it also known as the Temple of the Italian Glories (Tempio dell'Itale Glorie). In front of the Basilica there is famous marble statue made by Enrico Pazzi decidated to Dante Alighieri, and formerly places in the middle of the piazza. 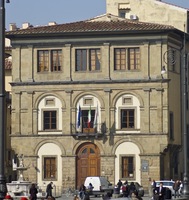 Aside from the basilica, several important palazzos are on the square. Palazzo Cocchi-Serristori, on the opposite end from the basilica, is the 15th century (with earlier foundations) masterpiece of Giuliano da Sangallo, the personal architect of Lorenzo il Magnifico (with later work also attributed to Baccio d'Agnolo and Simone del Pollaiuolo). Today it houses the headquarters of the First Quarter neighborhood of Florence. In front of the Palazzo there is a baroque fountain originally attributed to Pietro Maria Bardi, constructed in 1673. It was later restored (circa 1816) by Giuseppe Manetti. 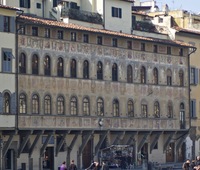 On the south side of the square lies the Palazzo dell'Antella (or Antellesi), a long building with a facade decorated with amazing (yet mostly destroyed) frescos by Giovanni da San Giovanni, and with windows of odd sizes (supposedly so that when seen from the steps of the church they all appear to be the same size). Today the ground floor of the Palazzo house shops and restaurants, while the upper floors are run by the Piccolomini family as short term tourist rentals.

The large rectangular shape of the square makes it a perfect place to host events, in particular the famous game of Calcio Fiorentino played every spring between the teams of the four "neighborhoods" of Florence. In 2006, Roberto Benigni recited Dante's Divine Comedy beside the Dante statue on the steps of the basilica. Almost every week a different themed market or festival takes place in the square - the annual Christmas market and the newer chocolate festival are just two examples of the many kinds of activities to discover in the piazza. It is also home to the Florence Marathon in the fall and the Half Marathon in the spring.

During the day the piazza is filled with people young and old admiring the basilica and enjoying the bustle of the square, while at night it becomes a meeting place for Florentines and tourists and a center for nightlife. The steps of the basilica and the benches of the piazza become saturated with young people talking and drinking beer, while the nearby bars add their overflow to the revelers. For coffee or aperitivo check out the chic bar Oibo (southeast corner), or for a delicious and romantic candle lit dinner, inside or out during the warmer months, try the Ristorante Boccadama.

Here is a minute of video of Piazza Santa Croce: