You can reach many interesting cities from Florence in a day - even outside Tuscany. I finally made it to Milan (about 3 hours on the Eurostar train - 42 euro each way, 2nd class the new trains starting in mid-December 2009 will cut this trip to about an hour and a half!) for the first time a few weeks ago, and even though it was a rainy day I had a great time strolling around the center of the city.

Coming into Milan from Florence on the train you enter the city at the Stazione Centrale - an absolutely huge Fascist influenced piece of architecture that is currently (winter 2008/2009) being modernized. The cavernous interior spaces of this station are truly remarkable. The station is a little bit of a hike from the center so I took the underground (Linea 3) to Piazza Duomo. This can be a little tricky so make sure you read the signs closely - the line is called "Duomo" but from the train station you need to make sure you are heading in the direction of the Duomo (the terminus in that direction is San Donato) and not out into the suburbs.

I really only scratched the surface of this rather large, sprawling Italian metropolis - below are a few of the things I saw: 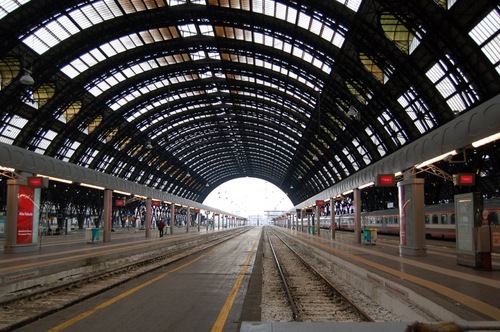 The platforms inside Milano Centrale.

Coming up the steps from the subway at the Duomo stop, you arrive in the Piazza del Duomo, with the cathedral right in front of you: 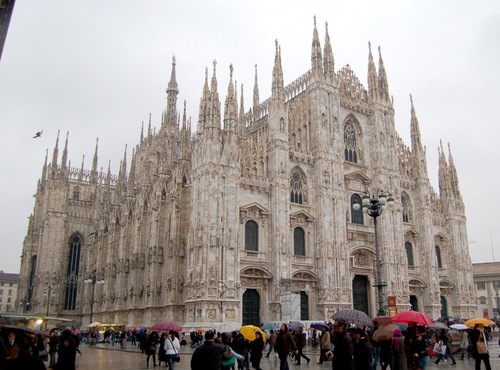 This is one of the largest cathedrals in the world, but you don't really get the scale from the outside - the large piazza in front and open space on the sides don't give your eye much to compare it to. Once you are inside you get a better feel for how massive it is: 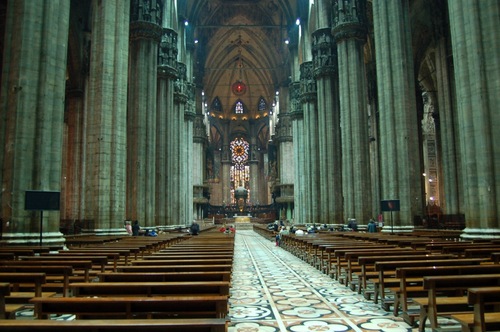 There is a lot to see inside, and you can also visit the roof (which I saved to do with my family on a return trip, in the sun I hope). Right next to the Duomo is the prototype of the modern mall - the Galleria Vittorio Emanuele II. Inside are all kinds of fancy shops and places to eat. The engineer of this piece of architecture fell to his death from one of the girders shortly before the opening and never got to see it full of people: 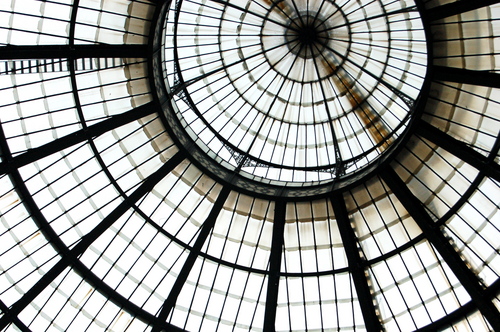 If you walk through the galleria to the other side you end up in a tiny piazza, and across the street is the world famous La Scala opera house (Teatro Alla Scala). Unfortunately it isn't that exciting from the outside, especially on a rainy day: 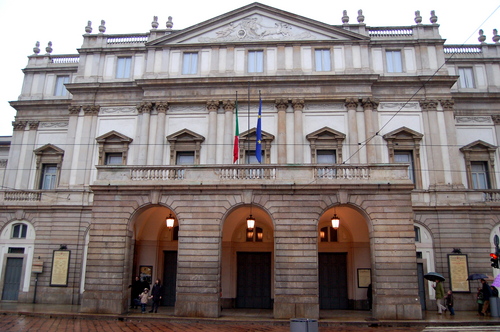 Those were the main things I saw as I walked around for several blocks in most directions from Piazza del Duomo. Alas there was an ulterior motive in the trip to Milan. For lunch, I treated myself to the Nobu in the Armani building. Good sushi is hard to come by in Florence, and I was really looking forward to trying some in Milan. The sushi was very good - a California roll with real lump crab meat, a Yellow Tail roll, and some Octopus sashimi. I started with a mushroom broth soup which was great - but the fried shrimp with creamy spicy sauce ruined the meal. It was mushy, the shrimp were tiny and not well cleaned, and overall the dish was more like a greasy lump of fishy fried dough than anything else. I have eaten in both Nobu and Nobu Next Door in NY City, and I can't imagine ever being served anything close to this dish at either location. Sorry but no photos from inside the restaurant.

I ended the day by visiting the Pinacoteca di Brera, which holds arguably Milan's most important collection of paintings. Most of the works in this museum were the loot of Napoleon. I was lucky to see a group of paintings by one of my favorite artists, Caravaggio, that were part of a special exhibit, but the real masterpiece I was looking for was Mantegna's "(Lamentation over the) Dead Christ": 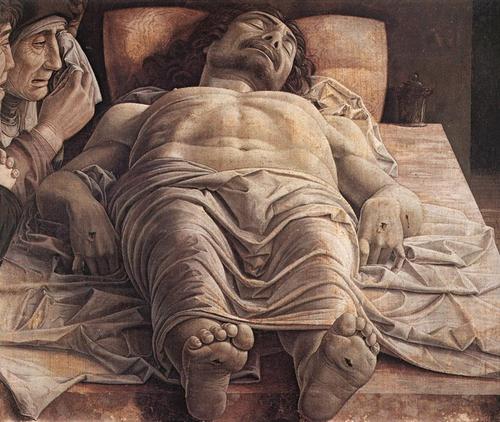 This is a powerful work on many levels - but I was surprised by the scale of it. When you only know a work through books and art history classes you can be fooled into ascribing thoughts to it that just don't hold up when you see it in person. I always expected this to be a large work, but it is actually fairly small - definitely an easel size work. I sort of imagined having to look at this huge elongated form, but instead it is sort of Christ stuffed into a frame - akin to maybe an old television set. You really feel the sense of being a voyeur looking at this picture, and seeing the details, especially on the faces of Mary and John on the left, make it a very intimate and life like experience. A great piece of art and not to be missed on a visit to Milan.

There is definitely more to see in Milan, and hopefully I will be returning soon.